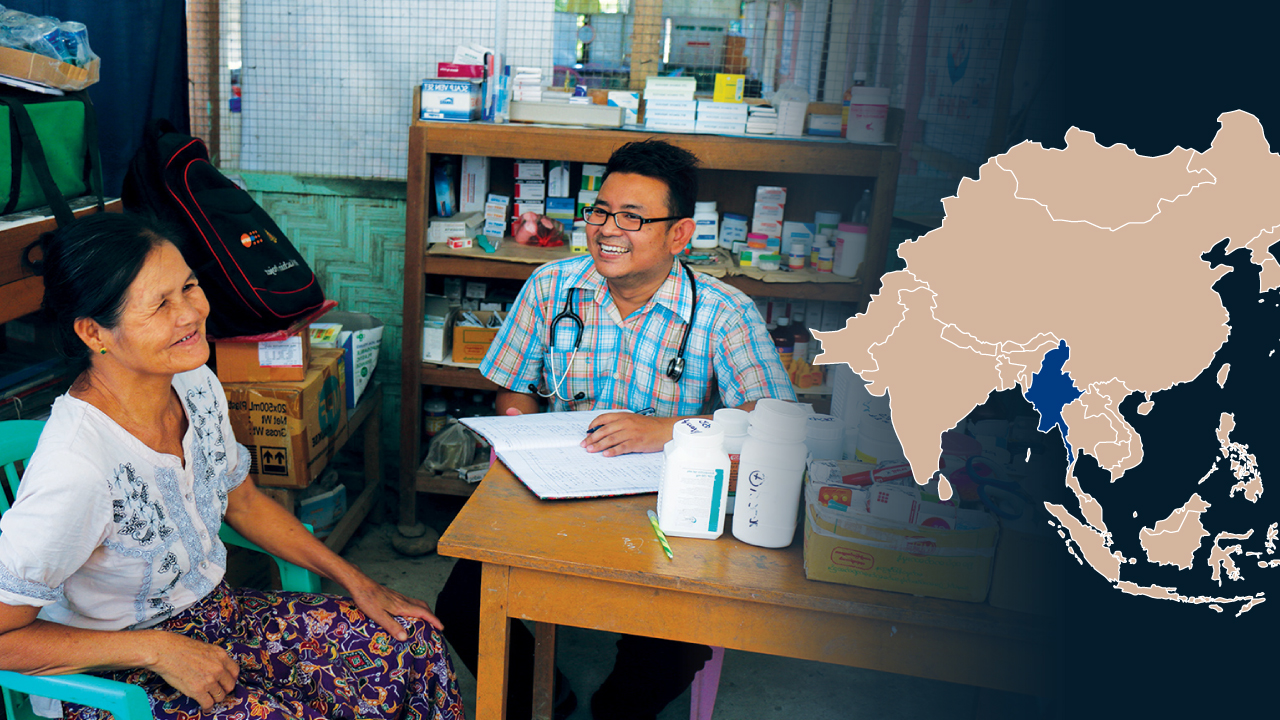 Women in refugee camps visit mobile clinics, supported by United Nations Population Fund, UNFPA, to get maternal and reproductive health  services and to learn about their rights. The clinics offer information about women’s right to her own body and support services to victims of domestic violence. Picture: UNFPA Myanmar.

The military seized power in Myanmar on 1st February 2021. After the previous 50-year-period of military rule, Myanmar has been on the path towards democracy for no longer than approximately a decade.

In the 2021 coup, the military arrested the country’s elected leaders, preventing the newly elected parliament from convening. The military regime is now suppressing information and communications channels. The coup was followed by widespread demonstrations and the creation of a civil disobedience movement. The army and the police responded with force and have arrested and killed demonstrators and civilians.

The civil disobedience movement is ongoing and many public services are dysfunctional. Clashes between the army and newly formed peoples defence forces are continuing, and violence has spread to all parts of the country. Conflicts between ethnic armed organisations and the Myanmar military have also increased.

International organisations and civil society organisations are facing major barriers to operating in Myanmar. Development partners have jointly decided to stop all cooperation with the military regime and the activities have shifted from traditional development cooperation to supporting the resilience and survival of people. There is a growing need for humanitarian assistance.

Myanmar has been one of Finland’s partner countries for development cooperation since 2012. Under the current circumstances, Finland is continuing its development cooperation to a limited extent. Support is directed to the peace process, gender equality and decent living conditions, as well as to education to the greatest extent possible.

Finland supports the people in Myanmar via the UN agencies and other international actors as well as via civil society organisations . Before the military coup, Finland’s development cooperation through the Country Programme for Myanmar was approximately EUR 16 million a year. Currently the situation is under constant monitoring, since it is important to ensure that support reaches the people most in need.

Finland supports peace and the foundations of democracy

Myanmar has suffered from internal armed conflicts for over 70 years. Conflicts have erupted mainly in the ethnic minority areas in the border regions. After the military coup, unrest has spread across the country and there is a need to find a peaceful resolution extending to all areas.

Finland promotes the peace process and democracy at the grassroots level by supporting, for example, the media, and CSOs and youth groups that promote peace at local level. Support for the civil society is channelled to maintain skills and expertise that advance peace and democracy.  Finland also supports unofficial peace talks carried out between the different parties of the conflicts.

Finland supports the realisation of human rights and especially the rights of women and children, children's access to education, and people’s livelihoods in rural areas. Education services and critical life-saving sexual and reproductive health services for women will continue. In addition, support to the farmers' coffee cooperative in Shan State, will continue, providing a reliable and licit livelihood to poor farmers.

Expected outcome: Realisation of human rights and the conditions for a decent life in the emergency situation

Finland’s partners for cooperation in Myanmar

Finland maintains regular dialogue with the EU, the Nordic countries, international organisations and other donors on a common approach and shared principles. It is particularly important to have a joint position towards the military regime and not to legitimise the military rule.

Finland cooperates only with reliable and long-term partners operating in the country. Support will be channelled through CSOs, the UN and other development actors, provided that their operating conditions in the country are maintained, and there is an agreement on jointly adopted principles.

Finland will continue its support for the United Nations Population Fund’s (UNFPA) Women and Girls First (WGF) Programme in Myanmar. The project promotes the rights of women and girls in conflict areas. Finland’s support for the project in 2020–2022 is EUR 4 million.
13.8.2020

Due to the coronavirus pandemic, children and young people around the world are left without education. Finland supports the organisation of teaching in development cooperation partner countries in this exceptional situation.
17.7.2020

Finland is supporting a project in Myanmar, which aims to dismantle gendered structural inequalities in society. The project is implemented by UN Women, and it is important in that it will help women to exert influence in the country’s democracy development and stabilisation. In Finland’s development policy, number one priority is strengthening of the rights and status of women and girls.
16.6.2020

Myanmar is launching a forest inventory project, which will be carried out also in conflict areas. Finland will allocate EUR 3.45 million in development cooperation appropriations to support the project in the first two years of its implementation.
28.1.2020

What significance does the interim decision of the International Court of Justice have for the Rohingya minority in Myanmar?

Last week, the International Court of Justice of the United Nations (ICJ) issued an interim decision in the case against Myanmar brought to the Court by The Gambia. In its application, the West African country of The Gambia argues that Myanmar has violated the Convention on the Prevention and Punishment of the Crime of Genocide in the treatment of the Rohingya minority of the country.