Every year hundreds of millions of people suffer as the result of natural disasters, climate change, armed conflicts and other crises. Humanitarian aid saves human lives, relieves human suffering, and maintains human dignity during a crisis. It is financed from Finland’s development cooperation appropriations.

﻿Focusing aid where the need is greatest 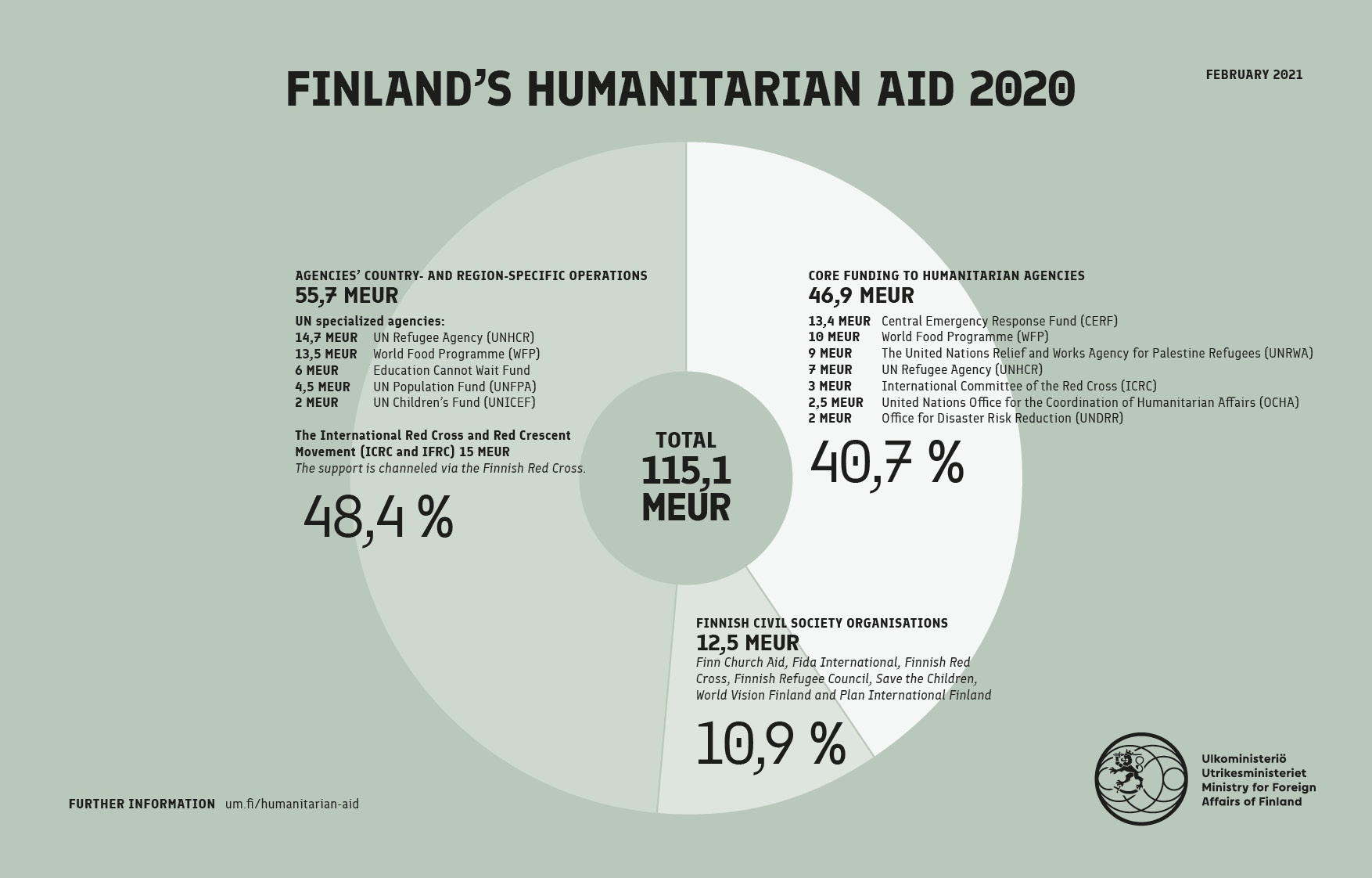 Finnish aid is directed to countries that have made a formal aid request to the UN, provided that their humanitarian situation has been subject to a reliable needs assessment and a UN-coordinated consolidated appeal has been made by humanitarian aid organisations.

When making an aid decision, Finland considers several factors: the extent of the crisis, the proportion of the population affected by it, the numbers of dead and sick, those in need of emergency aid and acutely malnourished children under the age of five. 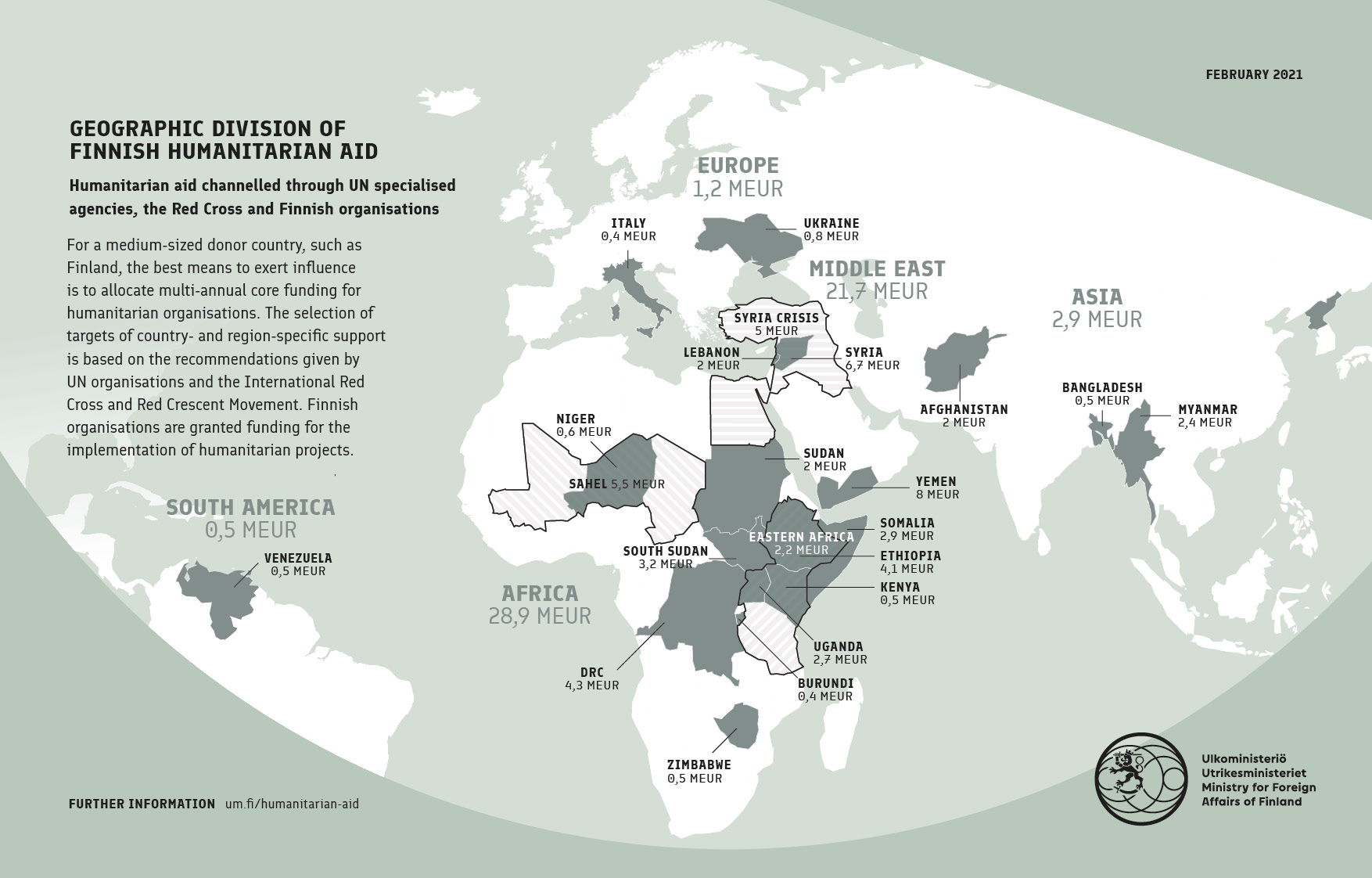 ﻿Organisations bring disaster aid where it is needed

It is important for Finland that the organisations it supports operate openly, responsibly, effectively and impartially. The organisations delivering aid must have sufficient authority to operate in affected crisis zones and the ability to bring aid where it is needed in an emergency situation. Refugees from South Sudan at the border of Kenya and South Sudan. Photo by Claus Lindroos.

The Ministry for Foreign Affairs of Finland channels its funds for humanitarian aid through UN bodies, the international Red Cross movement and Finnish aid organisations.

These organisations are engaged in concrete aid work in crisis locations: distributing food aid, improving refugees' living conditions by building schools and supporting the education of children, and enhancing health care, water supply and sanitation in refugee camps. Creating the proper conditions for livelihoods speeds up recovery from a crisis and prepares the ground for reconstruction and the return of refugees and those who have fled their homes.

Protecting the civilian population is an essential part of aid in conflicts and situations of unrest. Children, for instance, need special protection when disasters strike, since they are at risk of being separated from their families and may end up the victims of violence and abuse or be recruited as child soldiers. Women and girls, who may fall victims of sexual violence used as a means of warfare, also need special support. Finland is an active supporter of the rights of persons with disabilities and humanitarian aid that is inclusive of them.

Syria and its neighbouring countries need help, Finland is shouldering its responsibilities

Not only is the war in Syria, which has continued since 2011, a vast humanitarian catastrophe; it is also an immense regional development crisis. Within Syria, 13.5 million people are in need of protection and humanitarian aid – more than half of them children and young people.

A UN-coordinated appeal for assistance was issued at the high-level conference on Syria hosted by Finland in Helsinki in January 2017. The Helsinki conference had three principal messages for the international community: the need for assistance to Syria and its neighbouring countries will remain enormous for years to come, support to women and their active role in relief operations must be given more attention, and with regard to future building of reconciliation, it is important to support Syria’s civil society.

Finland has consistently shouldered its responsibilities in supporting Syria. In 2016, aid of EUR 34 million was allocated to the Syrian crisis. Finland’s support to the victims of the Syrian conflict is divided between humanitarian aid, to alleviate immediate suffering and help refugees, and development cooperation strengthening the capacity of local communities especially in neighbouring countries hosting Syrian refugees.

Aid within Syria has not reached all of those in need because the warring parties have blocked aid deliveries despite cease-fires and attempts at peace negotiations.

Violations of human rights and international humanitarian law continue in Syria. Finland strongly supports the work to combat impunity and sees it as a prerequisite for a lasting peace. In 2017–2018, Finland will give EUR one million to support the work of mechanism supporting Syria’s accountability

Putting the Needs of Persons with Disabilities at the Centre of Humanitarian Action – Finland’s Achievements (PDF, 318 KB)

﻿Assistance must be impartial

Internationally agreed practices highlight humanity, impartiality, neutrality, and independence. Aid is to be provided solely on the basis of need, and not for political, military or economic reasons. 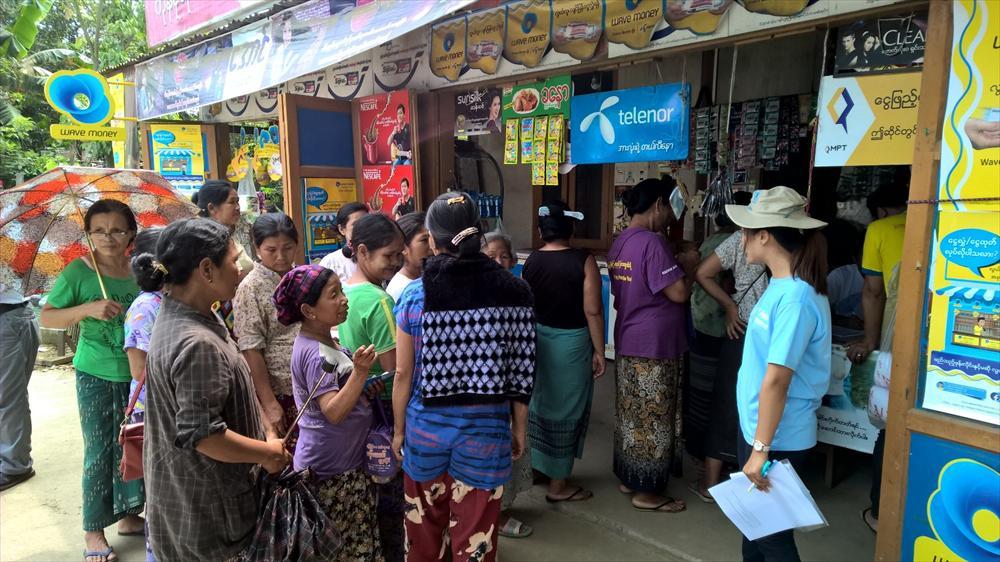 Recipients of humanitarian aid in Myitkyina, in northeastern Myanmar. Photo by Claus Lindroos.

The principles guiding Finnish action are defined in Finland's Humanitarian Policy, the Guideline Concerning Humanitarian Assistance and the Use of Funding, and the European Consensus on Humanitarian Aid.

It is important for Finland that humanitarian activities focus on vulnerable groups – especially girls, women and persons with disabilities – as well as environmental effects, the promotion of equality and the reduction of inequality.

Little attention to date has been paid to the inclusiveness of humanitarian efforts to persons with disabilities. In crisis situations they have often been left without information, assistance and the services they require.

In May 2016, the Charter on Inclusion of Persons with Disabilities in Humanitarian Action was endorsed at the World Humanitarian Summit. The Secretary-General of the United Nations lauds the Charter as one of the summit’s greatest achievements. The implementation of the Charter is off to a good start and this long neglected issue has finally gained in visibility and attention.

One of the key aspects of the Charter is the development of guidelines and standards for the inclusion of persons with disabilities in all humanitarian work. These guidelines are currently being developed within the framework of the Inter-Agency Standing Committee, which brings together the most important humanitarian organisations. Finland is providing support of EUR 178,000 to the development work via UNICEF.

﻿Finland as an active player in humanitarian assistance

Finland actively participates in humanitarian aid cooperation at EU level and within the international donor community as well as in the executive boards of the agencies and organisations it finances. In the EU, the key channel of influence is the Working Party on Humanitarian Aid and Food Aid (COHAFA). During Finland's Presidency of the Council of the European Union starting in July 2019, Finland will chair COHAFA's meetings.

Finland emphasizes the leading role of the UN in aid coordination and supports the UN’s current humanitarian aid reform whose goal is to create an efficient and well-coordinated international humanitarian aid system.

Finland played a central role in the preparations of the first-ever World Humanitarian Summit (WHS) which was held in Istanbul in May 2016.

Along with field missions and dialogues with secretariats, participation in donor cooperation and in the work of executive boards is crucial for monitoring and supervising Finland's assistance.

﻿From humanitarian aid to development cooperation

When a crisis-torn country or region is returning to normalcy, it faces many challenges. For Finland, it is important that crisis prevention, humanitarian aid, peace-building, reconstruction, and development aid are flexibly combined. These different phases are part of a continuum; they support each other and help people overcome the crisis.

Measures to prevent disaster risks, limit damage and improve the capacities of organisations to act in emergencies are also considered important.