Mozambique is one of the world's poorest countries, which still suffers from the political, military and economic instability after the civil war. Extreme poverty has decreased, but almost half of the population still lives below the poverty line. Mozambique has abundant natural resources, but their exploitation is only getting started. At the earliest, they are expected to bring in significant revenues in about ten years. The focus of Finland’s support to Mozambique is on developing basic education, developing democracy and strengthening governance, and improving food security among the poorest farmers.  Finland's planned budget frame for Mozambique in 2016–2019 is EUR 52 million.

In 2018 Mozambique ranked 180 in the UNDP Human Development Index. About half of the population is illiterate, 43% of the under five-year-olds suffer from chronic malnutrition, and social inequality is growing. 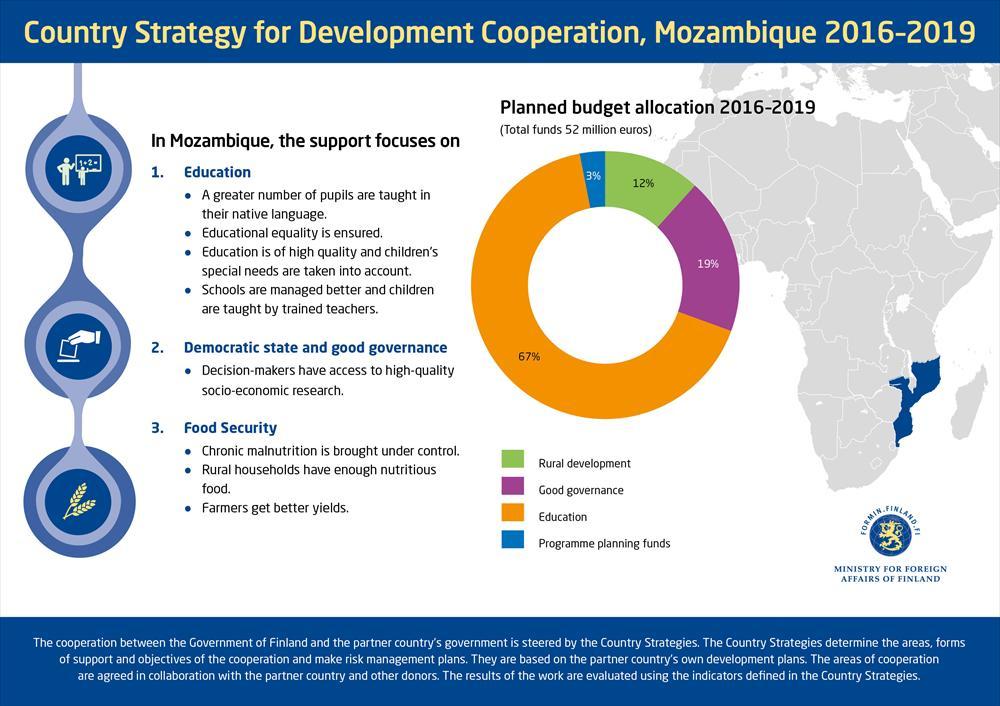 The greatest risks in implementing the country strategy in Mozambique are linked to corruption and shortcomings in the state's financial administration. The risks also include overexploitation of natural resources and problems related to the distribution of the income derived from them. Reducing poverty and inequality requires political commitment by the Government to implement an economic policy that also benefits the poor.

Finland aims to strengthen the country’s research capacity and institutional competence for the planning and monitoring of public sector finances.  Finland's financial contributions and the projects are monitored closely.

​​​​​​​Extreme weather events such as destructive floods and droughts occurring yearly are also a threat to sustainable development in Mozambique.

Finland also supports the economic and societal development of Mozambique through UN agencies and international financial institutions. The key partners are UNICEF, UNFPA, UN Women and WFP as well as the World Bank and the African Development Bank.

Unit for Southern and Western Africa

The Ministry for Foreign Affairs is participating in the international programme and will be present among the virtual exhibitors at the Educa goes digital event on 29–30 January. At the event, on Friday, Minister for Development Cooperation and Foreign Trade Ville Skinnari will take part in a panel discussion on the topic of the global learning crisis.
13.8.2020

Due to the coronavirus pandemic, children and young people around the world are left without education. Finland supports the organisation of teaching in development cooperation partner countries in this exceptional situation.
6.8.2020

Finland’s development cooperation appropriations support access to education and disarmament of Renamo troops and their return to civilian life in accordance with the peace agreement.
20.3.2020

More than 30 African countries have reported coronavirus infections. The matter has been addressed without delay, but Finland’s missions in Tanzania and Mozambique estimate that countering the epidemic may be difficult and Africa will need outside support.
21.2.2020

Minister Ville Skinnari will visit Tanzania on 23–25 February and Mozambique on 26–28 February. During the visit, the Minister will learn about Finland's development cooperation in the two countries and have meetings with their political leadership. The visit will also promote commercial cooperation between Finland and these countries.