The Northern Dimension (ND) is an instrument of cooperation between four equal partners: the European Union, Russia, Norway and Iceland. Geographically the ND covers Northwest Russia, the Baltic Sea region and the European Arctic areas, including the Barents region. 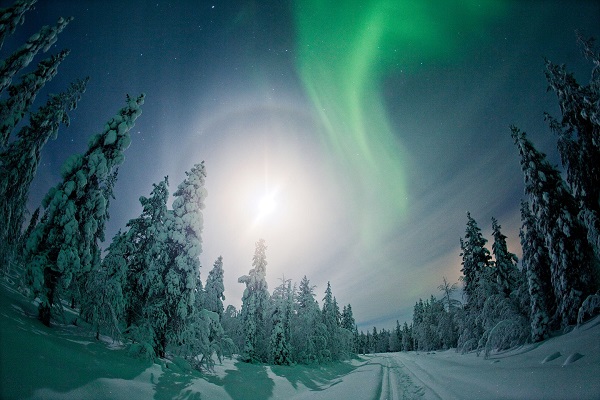 The Northern Dimension embodies several areas of cooperation which are of concrete importance to the citizens of the area. Photo: Visit Finland, Miikka Niemi
The Northern Dimension policy aims to strengthen stability, well-being and sustainable development in the region by means of practical cooperation. In addition to governments, universities, research institutes and the business community also participate in the ND cooperation.

In Finland, the Ministry for Foreign Affairs coordinates the policy of Northern Dimension.

The ND partnerships differ in nature and modes of operation, but they all strive to combine policy-making, expert work and practical-level project activities. Thanks to their diversity, the partnerships have proved to be a productive way to carry out concrete cooperation.

The ND's own bodies convene on a regular basis to discuss the development of the policy. Partner countries' MPs also meet every other year at a Northern Dimension Parliamentary Forum to promote activities.

Funding of the Northern Dimension

ND cooperation is based on the principle of co-financing. Funding is provided not only by the participating countries but also via the EU's funding instruments and programmes and International Financial Institutions (IFIs). EU-funding earmarked to projects carried out under ND partnerships creates stability and continuity in the ND cooperation.

The Northern Dimension Environmental Partnership addresses issues relevant to the region's environment: the protection of water bodies (Baltic Sea and Barents Sea), nuclear safety and special issues such as waste management and district heating projects. The NDEP was established in 2001. Its objective is to support and co-ordinate funding for priority cross-border environmental projects in the ND area.

The NDEP Support Fund, launched by the initiative of International Financial Institutions, has received contributions from the European Union, Belarus, Belgium, Canada, Denmark, Finland, France, Germany, the Netherlands, Norway, Russia, Sweden and the United Kingdom. By 2016, a total of EUR 348 million has been allocated to the NDEP Support Fund, with EUR 182 million earmarked for environmental projects and EUR 166 million for nuclear safety projects.

The Fund supports environmental and energy efficiency projects in Northwest Russia and Kaliningrad and nuclear waste projects especially in the Kola Peninsula. A concrete example of the environmental projects is the treatment of waste waters in St Petersburg. Environmental cooperation has also been extended to Belarus, which belongs to the catchment area of the Baltic Sea. In the sector of nuclear safety, projects focus on the processing of radioactive waste and the safe storage of spent nuclear fuel.

The Northern Dimension Partnership in Public Health and Social Well-being was established in 2003 to reduce the spread of communicable diseases and prevent life-style related diseases, to promote well-being and quality of life of people living in the area and to support cooperation in the health and social sectors.

The core of the NDPHS is formed by expert groups which focus on the following:

The NDPHS Secretariat is located in Stockholm. The partnership does not have a support fund, but interested parties provide financing for projects on a case-by-case basis.

Transport is one of the developing priority areas of the Northern Dimension. Improvement of transport infrastructure is important for the economic development of the area.

The Northern Dimension Partnership on Transport and Logistics was established in October 2009. The partnership is geared to accelerate projects related to northern transport routes in the Baltic Sea and the Barents regions.

In addition to projects, the partnership serves as a forum for harmonising policies and practices relating to transport and logistics issues. A Support Fund has been established on Finland’s initiative to facilitate project preparation and implementation. The NDPTL Secretariat operates in Helsinki.

Cooperation across various creative industries has also been strengthened through the partnership.

The NDI is coordinated by the Center for Markets in Transition of Aalto University in cooperation with Saint Petersburg State University of Economics and Northern (Arctic) Federal University.

The Northern Dimension Business Council promotes networking between companies and dialogue between business and government structures in the Northern Dimension area. Practical work is carried out in sector- and theme-specific working groups, which are all co-chaired by European and Russian chairmen.

Sectoral working groups include cleantech, pharmaceutical industry, machine building (components for cars) and creative industries. Thematic groups focus on energy efficiency, funding and education/labour issues. All forms of cooperation are open to interested companies irrespective of their size or country of origin.