Finland’s development cooperation in Syria and in its neighbouring countries promotes a sustainable solution to the Syrian conflict and strengthens the rights of women, children and persons with disabilities. 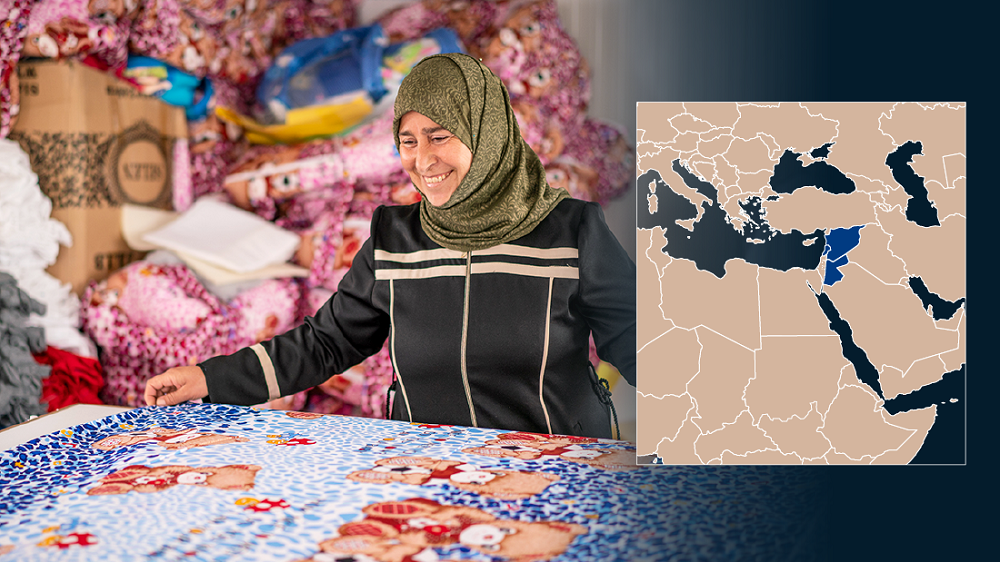 In 2020, Finland contributed to the creation of aid employment for 2,347 women at the UN Women’s Oasis empowerment centre in Jordan. Similar centres have been set up in Za’atari and Azraq refugee camps and in various locations in Jordan. They offer services to Syrian refugees and Jordanian women who are in a vulnerable position. Photo: UN Women

The Syrian conflict, which began in 2011, is one of the worst humanitarian crises of our time. Of people in Syria, 90 per cent depend on external assistance. Because of the war, several millions are either internally displaced or have left the country, and the neighbouring countries’ capacity to accommodate Syrian refugees is stretched to the limit. The conflict has increased instability in the Middle East and the consequences spill over into the security situation in Europe.

Finland’s Strategy for development cooperation and humanitarian assistance in the Syrian crisis should be adapted to reflect the changing demands, but this is difficult because of constant changes in the conflict.  The consequences of the COVID-19 pandemic and the impacts of climate change also show in developments in Syria.

At the moment, Finland and Syria do not have diplomatic relations. In Syria, Finland follows the common policies of the EU and emphazises that both Finland and the EU should monitor the situation and adapt their work to the prevailing situation at any given time.

Finland wants to participate in formulating solutions that can contribute to ending the war and to alleviating the suffering caused by the war. The objectives of Finland’s comprehensive activities in Syria are described in the Country Programme for development cooperation. In 2021–2024, Finland will concentrate on strengthening the inclusiveness of the peace processes, accountability, and the application of the nexus approach in responding to the crisis.  In addition, Finland promotes gender equality, the rights of people who belong to the most vulnerable groups, as well as innovations and new solutions to humanitarian and other challenges.

Finland’s development cooperation in Syria in 2021–2024

In its development cooperation in Syria and its neighbouring regions, Finland will focus on peacebuilding and on strengthening the rights of women, children and persons with disabilities.  Finland aims to allocate approximately EUR 30 million in 2021–2024 to actions supporting response to the Syrian crisis.   In addition, Finland will direct needs-based humanitarian assistance, which will be channelled via UN organisations, the International Red Cross and Red Crescent Movement, and Finnish civil society organisations engaged in humanitarian assistance. In 2020, Finland’s humanitarian assistance to Syria amounted to EUR 11.7 million. 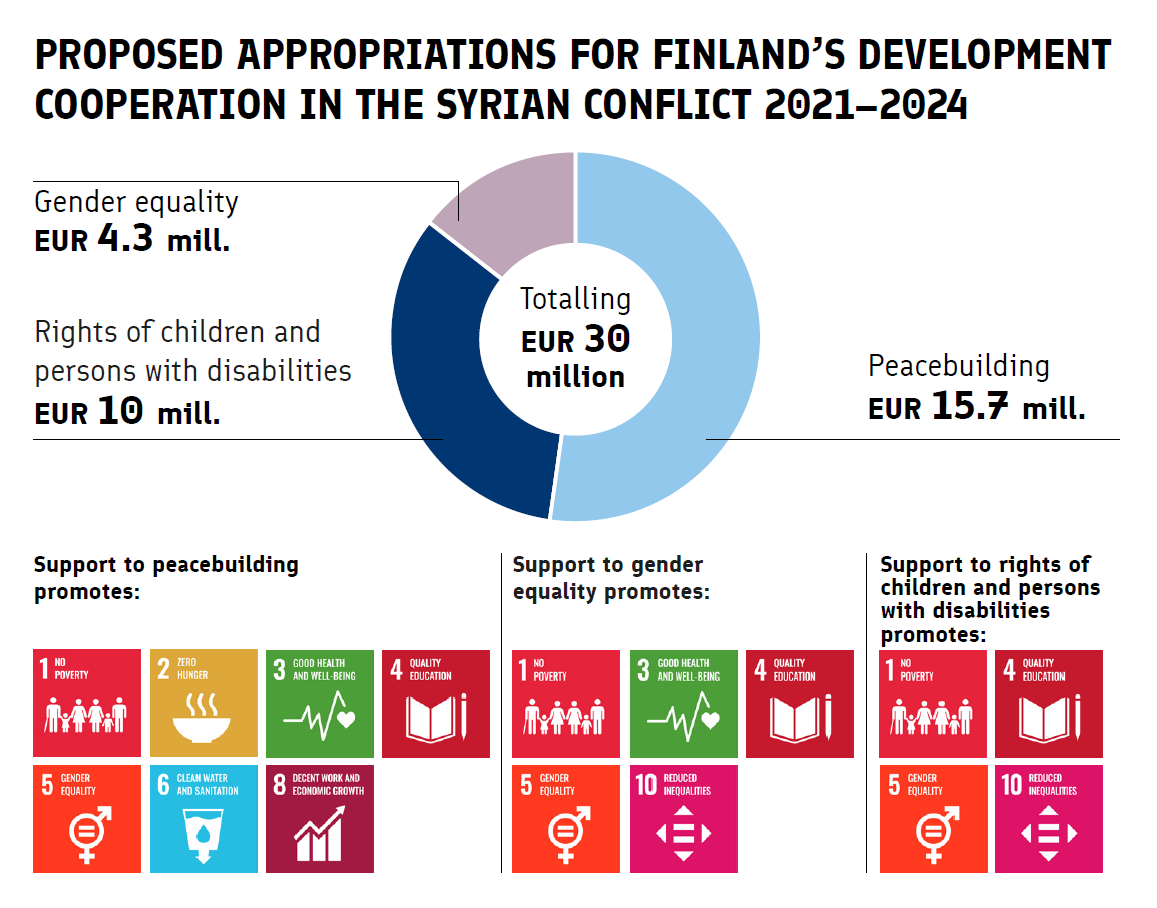 During the previous programming period in 2017–2020, Finland’s support has focused especially on promoting the political process in Syria and work against impunity, supporting the most vulnerable groups of people, and helping refugees in the neighbouring countries of Syria.

Finnish development cooperation supports the participation of women and minority groups in the Syrian peace process and political development.

In its development cooperation to strengthen equality, Finland focuses on improving the position and rights of women and girls in Syria, Jordan and Lebanon, who are affected by the Syrian crisis

Expected outcome: Rights of women and girls are realised

In 2021, Finland's development cooperation allocated to supporting the realisation of women's and girls’ rights in Syria’s neighbouring countries will be approximately EUR 1.8 million. In addition, Finland channels humanitarian funding, for example, to supporting the United Nations Population Fund (UNFPA) in Syria, which focuses on providing sexual and reproductive health services.

Finland promotes children's access to education and to social support, develops services aimed at persons with disabilities, and contributes widely to disability inclusion in society.

Expected outcome: The rights of children and persons with disabilities are realised

In 2021, Finland's support aimed at improving the rights of children and persons with disabilities affected by the Syrian crisis will be approximately EUR 5 million.

Finland’s partners of cooperation in Syria

Finland directs its support to the effects of the Syrian crisis mainly to multilateral organisations, such as the joint funding mechanisms administered by UN organisations.

Several Finnish civil society organisations (CSOs) are carrying out projects in Syria and its neighbouring countries in collaboration with local organisations.

Unit for the Middle East

The high-level meetings of the 77th Session of the UN General Assembly (UNGA 77) will start in New York on Monday 19 September. Minister for Foreign Affairs Pekka Haavisto and Minister for Development Cooperation and Foreign Trade Ville Skinnari will attend ministerial events in New York and have bilateral meetings with their counterparts and with representatives of the UN. Minister Skinnari also has Team Finland programme.

In the supplementary budget in July, the Government allocated additional funds to Ukraine amounting to EUR 70 million. Half of these funds has now been granted to improving food security and reproductive health services, ensuring the payment of teachers’ salaries, and to providing accommodation in Ukraine for those who have lost their homes.

Finland supports Iraq’s fight against the spread of coronavirus

Finland has committed EUR 2 million to support Iraq’s response to the COVID-19 pandemic. The support is part of Finland’s development cooperation carried out in Iraq. The funds will be channelled to Iraq via the Funding Facility for Stabilization (FFS), administered by UNDP.
13.5.2020

The coronavirus crisis exacerbates the position of people who were already in a vulnerable situation before the outbreak of the pandemic. This shows for example in Lebanon, which has the world’s highest refugee population in proportional terms, and in South Africa, which is one the most unequal societies of the world.
22.1.2020

Finland is to allocate EUR 4 million to the UN Development Programme (UNDP) for use in rehabilitating people with disabilities, including seriously injured civilians, supporting livelihoods and improving attitudes towards people with disabilities in Syria. This is a follow-on from Finland's earlier support for the same purpose.