Migration and refugee crisis in Europe

The large number of migrants and refugees entering Europe is a challenge for all EU member states. There is no single explanation for forced migration, but the prolonged conflicts in Syria, Iraq and Afghanistan as well as the crises in the Horn of Africa and West Africa play an important role.

Depending on the region of origin, there are often various underlying factors, such as political, economic and social reasons as well as pull factors in the receiving countries.

The Government of Finland has outlined both its domestic and international immigration policy measures. Finland’s objective is to bring uncontrolled migration in Europe under control and to direct people to legal and safe routes. In addition, effective measures are needed in the countries of origin and transit.

Finland works towards these goals as a part of the EU and considers that it is important to cooperate with African and Middle Eastern states, regional actors and the entire international community.

The Ministry for Foreign Affairs deals with migration related issues from the point of view of foreign relations. Responding to the ongoing challenge requires a comprehensive approach, a wide range of options and long-term activities. Many of the Ministry’s areas of operation are linked to the current migration situation in one way or another. These include, for example:

Addressing the root causes of forced migration falls specifically within the scope of activities of the Ministry for Foreign Affairs. The Ministry works in the affected countries through its network of diplomatic missions.

A working group led by the Unit for General EU Affairs and Coordination is responsible for coordinating migration-related matters within the Ministry.

The rights of asylum seekers and refugees are defined in international agreements and European regulations. The agreements bind Finland and other EU member states to give an asylum to people who are in need of international protection as stated in the Geneva Convention on the Status of Refugees.

Basic rights and human rights must be respected and implemented equally and without discrimination regardless of migration status. In particular, attention should be paid to persons in the most vulnerable situations, such as women and children.

Finland contributes to development cooperation, provision of humanitarian aid, and military and civilian crisis management in various parts of the world. The map shows the countries and areas receiving the most support from Finland in 2017. 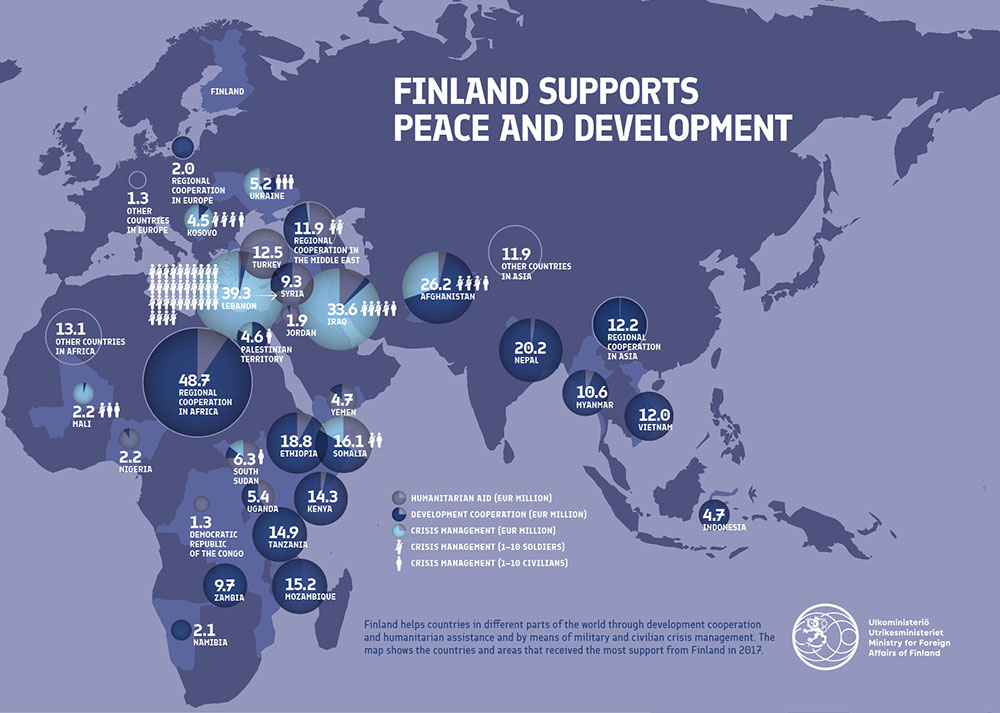