Finland's Arctic Council Chairmanship comes to an end in Rovaniemi

Finland's two-year Chairmanship of the Arctic Council will end at the Foreign Ministerial Meeting that will be held in Rovaniemi on 7 May. The Foreign Ministers of all the eight Arctic States – Canada, the Kingdom of Denmark, Finland, Iceland, Norway, the Russian Federation, Sweden, and the United States – are expected to arrive in Rovaniemi. The Ministerial Meeting will be chaired by Minister for Foreign Affairs Timo Soini.

Along with the ministers, invited participants will include the Arctic Council’s Permanent Participants, that is, the six indigenous Permanent Participan(layout.types.url.description)t organizations, as well as the states and organisations with an Observer status in the Arctic Council. The six Working Groups will also be represented at the meeting.

The meeting is expected to be attended by approximately 300 participants, and over a hundred media representatives will come to follow the event.

“The Finnish Presidency has been very successful. We have achieved progress in all our selected priority areas, and Arctic policy has gained a stronger role as part of Finland's foreign policy and the EU’s common foreign policy,” notes Foreign Minister Timo Soini.

“I’m much looking forward to the Ministerial meeting in Rovaniemi and meeting my colleagues from all the  Arctic states. There I will have the honour and pleasure to hand over the chairmanship to Iceland.”

The agenda on Lappi Arena

The Ministerial Meetings of the Arctic Council have traditionally signed a declaration, which reiterates the achievements of the outgoing Chairmanship and gives recommendations for the next Chairmanship. The declarations are named after the city where the meeting is held. In addition, the ministers will discuss the Arctic Council’s annual report and plan of action, approve possible new members with an observer status, and exchange views on topical Arctic matters.

Common solutions have been explored and identified

Finland’s two-year Chairmanship Program has focused on the mitigation of climate change and the implementation of the UN Sustainable Development Goals (SDGs) in the Arctic regions. The priorities of the Finnish Chairmanship have included strengthening of the meteorological cooperation; environmental protection, including reduction of black carbon emissions; knowledge and education; and regional cooperation.

” Well-functioning communications play a key role in the improvement of living conditions in the Arctic region. Equal opportunities for education lay a foundation for a sustainable future for people living in the Arctic. Meteorological research data creates a sustainable basis for the mitigation of climate change. I believe that these are unquestionable the common foundations on the basis of which Arctic cooperation will be continued”, says Aleksi Härkönen, Finland’s Ambassador for Arctic Affairs. 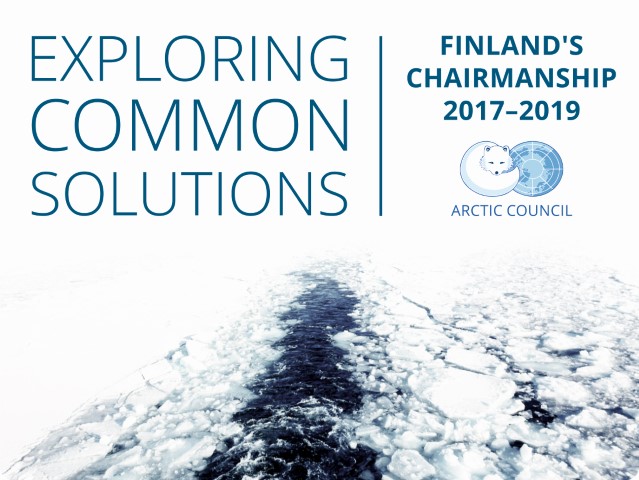 ”Collaboration during our Chairmanship of the Arctic Council has been excellent, not least thanks to the first-rate local partners of cooperation. We have held meetings in different parts of northern Finland: in Kittilä, Kemi, Ruka in Kuusamo, for example. We have been happy to be able to present Finland’s northern areas and Arctic expertise to our guests. The Ministerial Meeting in Rovaniemi will naturally be the biggest effort of our term, and I’m sure the event will be unforgettable."

The Arctic Council’s Chairmanship is based on rotation, that is, each Arctic State leads the operation of the Council for two years at a time. Finland will hand over the Chairmanship to Iceland.

Finland's Chairmanship of the Arctic Council 2017-2019

Central actors in the arctic