The ninth Review Conference of the Parties to the Treaty on the Non-Proliferation of Nuclear Weapons (NPT) was held in New York from 27 April to 22 May 2015. The conference is only held once every five years, which makes it particularly disappointing that no consensus was reached on an outcome. 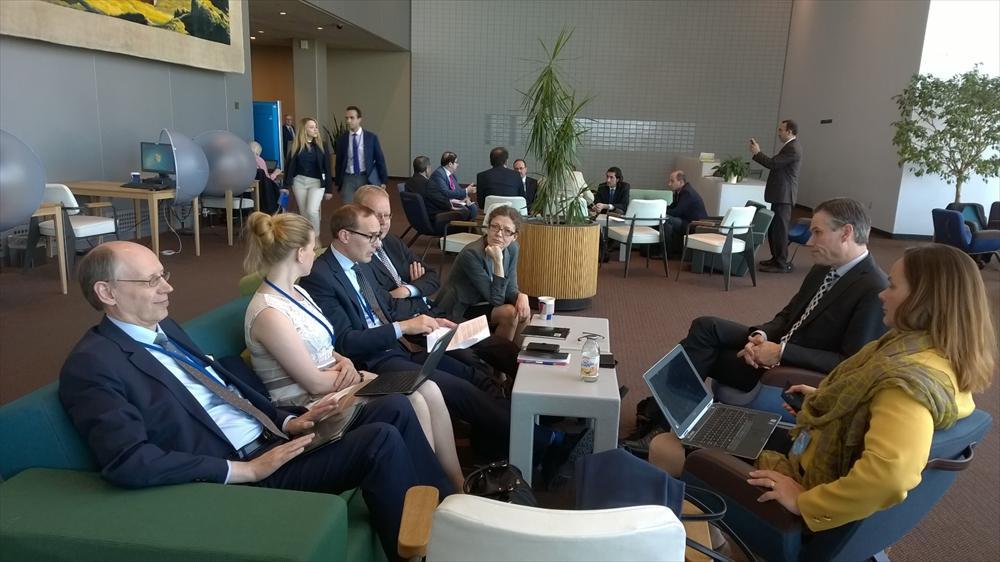 The Finnish delegation in an internal meeting at the UN. Photo: Sandra Hatzidakis

The night before the final day of the Conference, Taous Feroukhi of Algeria, President of the Review Conference, distributed her draft for the Conference’s final document. The 184 paragraphs of the draft text constituted a package of the various content areas of the Nuclear Non-Proliferation Treaty, which had been the subject of intense negotiations over several weeks.

The issue that stood in the way of consensus was the continued preparation and convening of a Conference on the Establishment of a WMD-free zone in the Middle East. According to estimates, a mutual understanding could have been reached on all other issues.

No consensus on Middle East conference

Klaus Korhonen, Ambassador for Arms Control and the Head of the Finnish Delegation at the Conference, points out that Under-Secretary of State Jaakko Laajava from the Ministry for Foreign Affairs and his team put in a great deal of work over a period of three and a half years to bring Middle Eastern countries together to discuss peace and security for the first time in 20 years. However, this was not enough for a region that has seen many peace processes.

The starting point originally agreed on for the project led by Laajava was that convening the Middle East conference would be contingent on all of the region’s countries being unanimous about the conference’s agenda and arrangements. At the Review Conference in New York, several countries supported a model that would have compromised on this original principle, but the new proposal ultimately became an obstacle to reaching consensus on the entire final document.

Korhonen echoes facilitator Laajava’s hope that the work done thus far will nevertheless provide a foundation to build on in the Middle East. The project was Finland’s most extensive diplomatic undertaking in the region. The role of facilitator also brought Finland plenty of positive exposure and increased Finland’s understanding and expertise related to the region’s challenges and opportunities.

Progress achieved in other areas to be built on

Another difficult subject at the Review Conference was nuclear disarmament. Consensus on that issue was practically reached, although some non-nuclear-weapon states and the NGO sector felt that the outcome did not constitute a strong enough statement in favour of disarmament and, ultimately, the banning of nuclear weapons.

The outcome reached with respect to the non-proliferation of nuclear weapons and peaceful uses of nuclear power failed to receive approval as it was part of the overall package for which consensus was not reached. The negotiation process provided a clearer picture of the aims of the various states concerned, which can hopefully be utilised in other contexts.

Finland was active in all subject areas and organised a highly popular side-event on the Global Initiative to Combat Nuclear Terrorism (GICNT). This marked the first time that the initiative, which was first introduced in 2006, was presented at the NPT Conference.

Emphasis on the significance of practical cooperation

The significance of practical cooperation in increasing nuclear security will increase. The next significant meeting in this field will be the GICNT Plenary Meeting to be held in Helsinki on 16–17 June 2015.

The author is a Counsellor at Finland’s Permanent Mission to the United Nations in Vienna and Finland’s Deputy Resident Representative to the IAEA.