The International Day against Homophobia and Transphobia is celebrated on May 17th. On the occasion of the worldwide celebration of sexual and gender diversities, and in recognition of Finland´s commitment to advance the human rights of lesbian, gay, bisexual and transgender (LGBT) persons,  Finland increases its support to the Global Equity Fund by 1.4 million dollars. 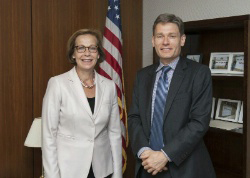 The Global Equality Fund was launched in December 2011 to support programs that advance the human rights of LGBT persons around the world. The Fund is a collaborative effort led by the U.S. Department of State to empower LGBT persons to live freely and without discrimination.

Finland will continue to work with the United States and other like-minded partners – including the governments of Croatia, Denmark, France, Germany, Iceland, the Netherlands, Norway and Sweden, as well as NGO´s and various foundations. Working together increases effectiveness and shows that ensuring the ability of LGBT person to live safely, freely and without discrimination is a growing priority among many governments.

The international community plays a leading role in promoting universal human rights and non-discrimination around the world. The United States and Finland will continue to focus their mutual efforts to ensure that all persons are free to live their lives with the dignity of full equality in human rights.