I wish to welcome all of you to Finland, Helsinki and Kalastajatorppa, to this international seminar on improving the international investment regime, which we have organized within the framework of the Helsinki Process on Globalization and Democracy.

The main conclusion of that very constructive conference was, that the basic principles and the framework of the Helsinki Process can still be used as a forum for multi-stakeholder dialogue in specific global issues where the Helsinki Process can bring added value and offer its services. One of the specific global issues that was identified during the discussion and in the co-chairs’ conclusions was the international investment regime, how it has evolved over the years, what are the challenges and problems we are facing, and what could be the ways and means to improve the regime.

This is a high priority issue for the Finnish government. Our Government’s program states that we will make efforts to influence the development of international trade rules, taking into account of the needs of the environment and consumer protection, human rights and core labor standards in accordance with ILO Conventions and other international agreements. We wish to underscore corporate and social responsibility in trade policies. And we support the adoption of a global agreement concerning investments, negotiated on a broad basis, in which rights and obligations of states and investors are addressed in a balanced manner.

With regard to Bilateral Investment Treaties, Finland has had a long and successful negotiating program. The first Finnish BIT was negotiated with Egypt in 1980 and has been in the following years extended to presently include some 65 agreements in force. Content wise, Finnish BITs have not remained carved in stone since the first Egyptian agreement but have been adapted to take into account different needs be it they from the civil society or the investors. Particularly important in the development of the Finnish BITs were the talks held in the OECD during the late 1990s. It was at that time when concepts like sustainable development and respect for international labor rights where introduced to the Finnish agreements.

In 2009, the Finnish negotiating program was suspended due to the entry into force of the Lisbon Treaty in which competences relating to international investment agreements were given to the European Union. With the Lisbon Treaty, investment protection agreements are now primarily negotiated by the EU while the Member States having the possibility under certain condition to negotiate their own agreements as well. 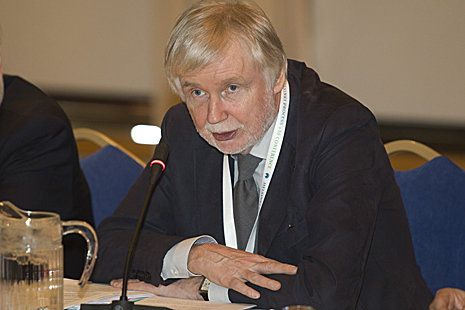 Finland has considered that the emerging role of the European Union as an agreement negotiator not only offers a possibility to advance the true and tested elements of our own BITs but also an opportunity to bring in fresh and interesting ideas to further advance the role of investment protection agreements in sustainable growth. It is in this context that the entry of the EU into the arena of international investment policy making provides for a pivotal moment to promote such ideas.

Thus, it is not by accident that the investment issues have appeared on the Helsinki Process agenda. Or rather reappeared, since the issue has been there all a along the earlier stages of our dialogue.

The Helsinki Process was launched not long after the failure of the negotiations on a Multilateral Agreement on Investment in the OECD. I was myself an active member in many of the NGOs which started the successful campaign to stop the treaty and I was happy with the outcome. This was a good result in my opinion because the draft MAI treaty would in many respects have tilted the balance of rights and obligations between multinational companies and governments clearly in favour of the former.

This did not mean that we were satisfied with the status quo. Indeed we did occasionally discuss the issue of Foreign Direct Investment also in the process. I personally raised the issue some years ago more or less in the same spirit in which the Finnish government has now included it in its program, but there was no follow-up. That we now have done so again is obviously not based on a wish to return to the draft MAI as such, for I hope that we all have learnt are lessons from its failure.

We all know that in spite of some efforts some ten years ago it was not possible to proceed to real negotiations within the WTO or elsewhere on this topic. However, in spite of the prevailing stalemate at the level of negotiations, some progress has been made. Particularly the policy Framework for investment, an instrument developed within the Investment Committee of the OECD through much more inclusive consultations, has tried to piece together the issues relevant for states and governments when developing their legislation regarding foreign investments. Another example is the business linkage program of UNCTAD, which tries to develop a model for linking investments to the needs of the local economy and job creation for the poor. Finland has supported both initiatives financially.

In the absence of a global agreement, we have seen an immense proliferation of bilateral investment agreements and other trade agreements covering investment issues. The international investment regime has become a virtual jungle of different and contradicting rules and regulations that all stakeholders seem to suffer from. In a regime based on bilateral agreements there is also a tendency for them to show a bias in favour of the interests of the stronger party.

This situation is causing a constantly increasing number of disputes – the all time record of 46 cases of investor-state disputes was filed in 2011. The arbitration itself has grown into a costly business that is lacking transparency and suffering from many procedural and legal weaknesses.

It is our firm belief that an agreement negotiated with full participation of the developing countries, with the right balance safeguarding the rights of governments and taking proper account of the need to ensure respect for environmental, consumer and labour standards as well as corporate social responsibility is still very much needed.

However, the pertinent question is whether time is ripe for moving forward in this area?

Let me be very clear on one point. Neither the Finnish Government nor the Helsinki Process is on the move to try to sell one particular solution or model to the challenges we face. Our primary interest at this stage is to sound out whether there is momentum enough to move into a more inclusive and systematic global dialogue about the investment issues.

Based on the diversified but encouraging feedback we received last year in Hanasaari, we have so far decided to do two things.

Firstly, we decided to commission an independent study on “Improving the International Investment Law and Policy Regime”. Dr Karl Sauvant, well-known to all people seriously involved in issues related to the international investment discourse, took the responsibility for this study, which is now available as a background document to this seminar. His convincing conclusion is that taking into account the profound changes in the international investment law and policy landscape, the regime can and must be improved. But we shall hear more about this in a while from Dr Sauvant himself, whom I wish to thank for his work and commitment.

Secondly, we decided to convene this seminar, inviting all key stakeholders involved in the international debate and political processes around the theme, to an open stock-taking and debate. As we have said in the concept paper attached to the seminar invitation, this is primarily a fact finding, listening and recording session about the issues at stake. We have no intention to try to turn this exercise into anything looking like international negotiations. Neither is this a decision-making forum, where participants would be expected to make commitments on behalf of their constituencies. But we are seriously interested in finding out whether there is interest enough to take this dialogue forward and further. I hope the deliberations at this seminar will give an answer to that question.

The way forward is paved with many alternatives that do not necessarily exclude each other, could be complementary, and also succeed each other in sequence.

1) The atomization of the current regime could naturally continue, each player trying to create a system and rules that best suit his purposes. This development would take place at the cost of the reliability, the predictability and the credibility of the regime.

2) The incremental improvement of the current regime that is taking place haphazardly here and there.

3) The latter might yield a collection of best practices and material for model agreements to be applied on a voluntary basis.

4) The development of different regional and plurilateral arrangements and tool-kits for their common use.

5) A multilateral frame agreement covering the general principles and code of conduct for the functioning of the regime, possibly divided into sub-agreements on specific issues.

All these alternatives deserve attention in our discussion. But I would tend to recommend to start realistically with a modest alternative of creating a working group of experts including representatives of all the relevant stakeholders that would start with a stock-taking exercise of the present regime and then move on through confidence building towards a proposal on how to improve the present international investment regime.

Finally, but very importantly the objectives of the Helsinki Seminar remain as follows:
1. Identifying the strengths and weaknesses of the current investment regime
2. Assessing whether there exists a favorable atmosphere among stakeholders to continue the process in one form or another
3. Identifying possible ways forward

Provided that we are sufficiently in agreement on point 2 – on the existing will to go forward – a good outcome to our Seminar would be the establishment of an informal expert group of all stakeholders. The basic objective of the Helsinki Process has been to facilitate official negotiations by temporarily providing a second track based on a multi-stakeholder approach. It looks to me that the current situation of the international investment regime is an obvious case for this kind of an informal approach as provided by Helsinki Process tradition and experiences.