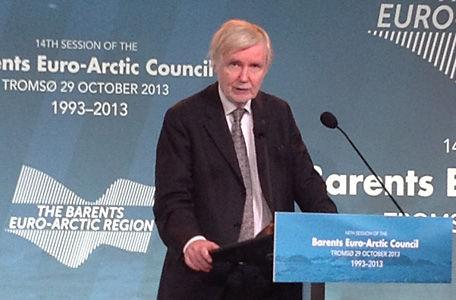 Dear Colleagues and representatives of the members of the Barents Euro-Arctic Council, the Regional Council and the Indigenous Peoples, Ladies and Gentlemen.

Let me begin by expressing my thanks to the City of Tromsø and the Troms County for the warm hospitability we have experienced during our stay here in Tromsø, the Arctic Knowledge Capital.

The future of the Barents economy looks promising. The Barents Region has potential for extraction of base metals and also for many critical minerals for the European and global industry. The expanding mining industry as well as the massive investments in oil and gas production in the Barents Sea increase economical activity and livelihood in the Barents Region. In long term the opening of the Northern Sea Route will bring additional economic opportunities. Also international and regional tourism in the Barents region is growing.

It is vital for the well-being of the people living in this region and of the surrounding nature that all economic activities in the sensitive arctic and subarctic regions take place in an environmentally responsible way. This is also a precondition for development of the tourism industry and the continuation of traditional livelihoods.

More information is essential for consolidation of conflicting interests and for development of sustainable extractive industry in arctic conditions. The Barents cooperation has its role in this work. Finland has been strongly committed to environmental cooperation in the BEAC, and the Working Group on Environment has achieved significant results during the Finnish chairmanship of the Working Group.

Finland welcomes the Action Plan on Climate Change as important achievement for the Barents Cooperation. The Action Plan systematizes and gives guidance to the efforts to mitigate the negative effects of the climate change. The regional climate change strategies developed in the three regions of northern Finland can provide an example for other regions in the Barents area.

In this context I would also like to underline the importance of Barents rescue cooperation and thank Norway for the excellent organization of the Barents Rescue Exercise 2013 in Troms County. This exercise was based on a scenario of a huge rock slide caused by erosion.

Functioning transport connections in the Barents region play a key role in the region’s development. I would like to thank the Norwegian Chair for the valuable work on the Joint Barents Transport Plan. We all share common interests in the efforts to develop transport infrastructure in the northern areas. Finland will proudly take the work forward with the aim of finding a common approach to the development of transport and logistics networks in the Barents region.

Last year there were 12 million border crossing on the Finnish-Russian land border. Finland issued 1,35 million visas - most of them multiple entry - to Russian citizens, of which 150.000 in Murmansk and Petrozavodsk. The high number of border crossings indicates that citizens of our countries have more and more contacts with each other. This is positive development.

Enhancing people-to-people contacts and cooperation with civil society across the Barents region is important. I would like to pay tribute to the forms of interaction which focus on people. Cooperation in the field of culture, youth, education and health has an important role in exchanging knowledge, experiences and best practices and in learning to know each other better.

The Indigenous peoples are an integral part of Barents cooperation and their participation in the activities of the Barents Euro-Arctic Council is of utmost importance. In 2012 the government of Finland renewed its aim to ratify the ILO Convention 169. The Government also established a ministerial working group on Sami matters. The group discusses and takes political decisions in matters relating to the Sami. Finland is also actively taking part in the negotiations on a Nordic Sami Convention between Finland, Sweden and Norway.

I am pleased to note that during the past few years the Barents cooperation has been able to benefit of the financing from the EU-Russia cross-border cooperation programmes. Especially, the multilateral Kolarctic Programme has become an important funding source for cooperation projects in the Barents Region. Finland will strive to enhance closer cooperation among the different stakeholders for the forthcoming programming period.

The Government of Finland adopted in August a new Arctic Strategy, which is broader than the previous one from 2010. The new strategy examines the possibilities for bolstering Finland’s position regarding the Arctic region; the creation of new business opportunities; the Arctic environment and the region’s security and stability; the position of the northern parts of Finland; international cooperation; and the Finnish Arctic expertise.

The cooperation in the Barents region is an important part of the wider arctic cooperation. Its strength lies in its practical nature and its regional and local dimension. To maximize the effectiveness of regional cooperation, synergy and coherence should be strengthened between different regional cooperation bodies with similar objectives, such as the Arctic Council, Council of the Baltic Sea States and the Northern Dimension,

In conclusion, let me thank the outgoing Chair of the Barents Euro-Arctic Council, Norway, for the outstanding work for our common Barents region. I would also like to thank the Region of Norrbotten for chairing the Barents Regional Council and welcome Region of Arkhangelsk as the new regional Chair. Many thanks also to the working Group Chairs and the International Barents Secretariat for their important work.