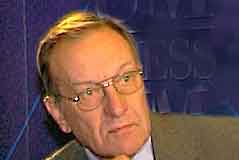 Excellencies, colleagues from near and far, ladies and gentlemen,

Thank you for being here, all of you. And many thanks for inviting us, from the North of Europe, to hold a seminar in Belgrade.

We would not be here were it not for H.E. Goran Svilanovic. It was the Federal Minister of Foreign Affairs of Yugoslavia who last February, at a meeting with the Finnish Minister for Foreign Affairs, Erkki Tuomioja, brought up the idea of arranging a presentation in Belgrade of Nordic regional co-operation. Finland, who is exercising the Chairmanship of Nordic co-operation this year, forwarded the proposal to the other Nordic countries and won their full support: presenting the Nordic Co-operation Model here was considered a timely task, especially with regard to the remarkable political changes which have taken place in Serbia in the past 12 months.

During the preparation of the seminar, it soon became obvious that the target group should be wide. The invited countries should span not only Western Balkans but also other states which have significant links – people-based, economic or political – with the region. Furthermore, it became clear that participants should represent various layers of society. Both NGOs and international organisations should be invited. Publicity and transparency must be our objectives. On this basis, we hope to reach both further and wider than with the two previous seminars on Nordic co-operation that were held in Sarajevo, in 1998, and in Ljubljana, a year and a half ago.

This far, I dare say, it would seem that we have been successful. Your presence here today is a positive indication of your interest, and we very much look forward to your participation in the coming discussions.

I thank the Ministry of Foreign Affairs of the Federal Republic of Yugoslavia for collaborating in an active and efficient way in the organisation of this seminar. Also the Embassies of the Nordic countries in Belgrade – and in the region – have been instrumental in the preparations.

When we now shall offer this overview of our Nordic co-operation, we do it both with pride and humility.

On the one hand, we know what we have achieved, and we know the preconditions we have had. Finland, Denmark, Iceland, Norway and Sweden are five relative small countries, with a total population of 24 million, situated in the extreme North of our continent. Our states include three autonomous areas, Åland, Greenland and the Faroe Islands. To a large extent, we have a common population and linguistic base, but the Scandinavian tongues do not include Finnish. We also have minority languages ranging from Inuit in Greenland to Sami, which is spoken by the Laps living in Finland, Norway and Sweden. Several of the Nordic nations have suffered from severe hardship caused by the Second World War, and were for decades affected by the shadow of the Cold War.

During the past 50 years, notwithstanding, and to a large extent thanks to mutual support and growing regional integration, we have been able to transform and reach what we are today. By joining our forces we have come this far. We have been able to build stable societies with a welfare system where the state guarantees basic security for all. Political stability and predictability in the activities of the administrations all contribute to the growth of economic resources and their distribution. Legislation is not identical in the Nordic countries, but we have a tradition of comparing needs and solutions. And we have entered fruitful co-operation with other states in our region. In this context, our common Nordic institutions, and the practice of informal consultation among Nordic administrations, have been essential tools. Together, we have acquired a position which we could not have got alone. It is this experience we wish to share with you today.

On the other hand, we must admit that the co-operation among the five Nordic states has not always been as swift and smooth as possible. Some objectives have failed altogether and in some questions we simply can’t find a common approach. Above all, we recognise that our experience may not be directly applicable to other regions. The Nordic model is not the only one in the world. Each case is different, but the general principles – and benefits – of regional co-operation have proved to be valid.

For our discussion, it is useful to take a look at today’s network of international and regional organisations, and also look back at were we started in the early 1950’s. Today, Denmark, Finland and Sweden are members of the European Union. The other two, Iceland and Norway, are linked to the EU through the European Economic Area (EEA) agreement and the Schengen agreement. Iceland, Denmark and Norway are members of Nato, while Sweden and Finland remain non-aligned. As you can see, the Nordic countries have different membership profiles both militarily and economically. Foreign policy and defence questions have been included in the Nordic Council agenda only after the end of the Cold War. However, the Nordic countries have over the decades closely co-operated in the United Nations peace-keeping operations. In the UN, the Nordics have maintained a principle of rotation of membership in executive organs including the Security Council.

In the Nordic region, there are now several forms of co-operation: