In its first issue in 2022, Kauppapolitiikka magazine focuses on industries’ roadmaps towards meeting the climate objectives. 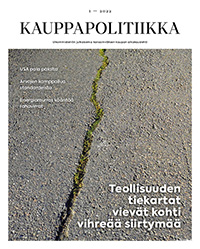 Finland is the first country in the world where different sectors of industry have prepared roadmaps for the transition to low-carbon economy. Sustainable development is one means to support competitiveness. Kauppapolitiikka deals with the relationship between economic growth and climate actions, too, debating which of the two is accelerating the other.

The new issue discusses also standardisation, which has become a theme for competition between the great powers. In its interview section, the magazine talks with Mikko Kärkkäinen from Relex Solutions.

This issue looks into the importance of language skills in foreign trade, as sales succeed best in the local language. In addition, the American market is conquered one step at a time.

Subscribe to the magazine or tell about it to a colleague!

The magazine is also available on the following social media channels:

Kauppapolitiikka is a magazine on international trade, published by the Ministry for Foreign Affairs.