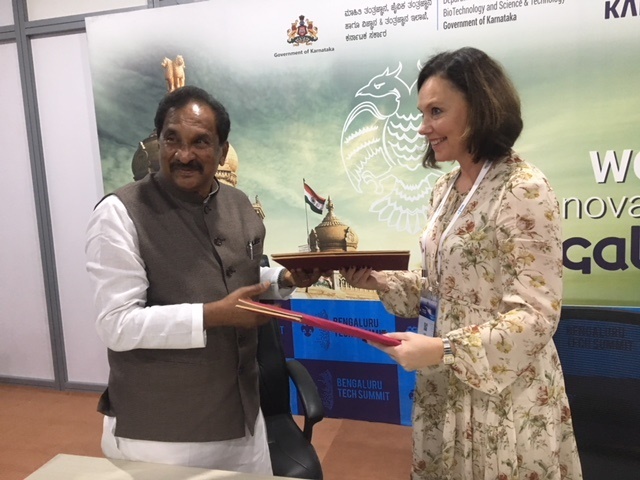 "Finnish companies have long-term experience of operations in Karnataka, which is known as the Silicon Valley of India. This Memorandum of Understanding supports practical cooperation between companies, researchers and public authorities. I believe that it will promote the growth of commercial cooperation between our countries," Minister Virolainen says.

With a population of 60 million, Karnataka is a central technology, innovation and startup hub. The Innovation Corridor between Finland and Karnataka was launched in 2017. It supports cooperation related to innovations and science and research, and cooperation between startups, industries and business incubators. The new Memorandum of Understanding was signed for five years.

The Innovation Corridor serves both as a virtual and concrete platform for cooperation. It helps researchers, entrepreneurs, companies and public authorities in identifying projects and helps launch innovation cooperation.

The University of Turku has laid the groundwork for projects with Karnataka, especially in the areas of biotechnology and medicine. One example of commercial projects that serves as a foundation for this cooperation is an agreement signed between Aqsens Health, a company based in Turku, and the Public Health Foundation of India. The project focuses on developing an analysis method for oral cancer and anaemia screening, relying on research conducted in the University of Turku and a cooperation model in Bengaluru. The Memorandum of Understanding will build on the experiences gained by Aqsens Health and use it to the benefit of other Finnish universities and companies.

During the export promotion visit to India from 29 November to 1 December 2018, Minister Virolainen was accompanied by a business delegation representing Finnish expertise in the digital, industrial, services and trade sectors.