“A teacher’s job is to give children a chance to have fun, feel hope and dream,” says Hanan al-Hroub from Palestine, who was awarded the Global Teacher Prize in 2016. Al-Hroub visited Helsinki last weekend at the invitation of the Ministry for Foreign Affairs. 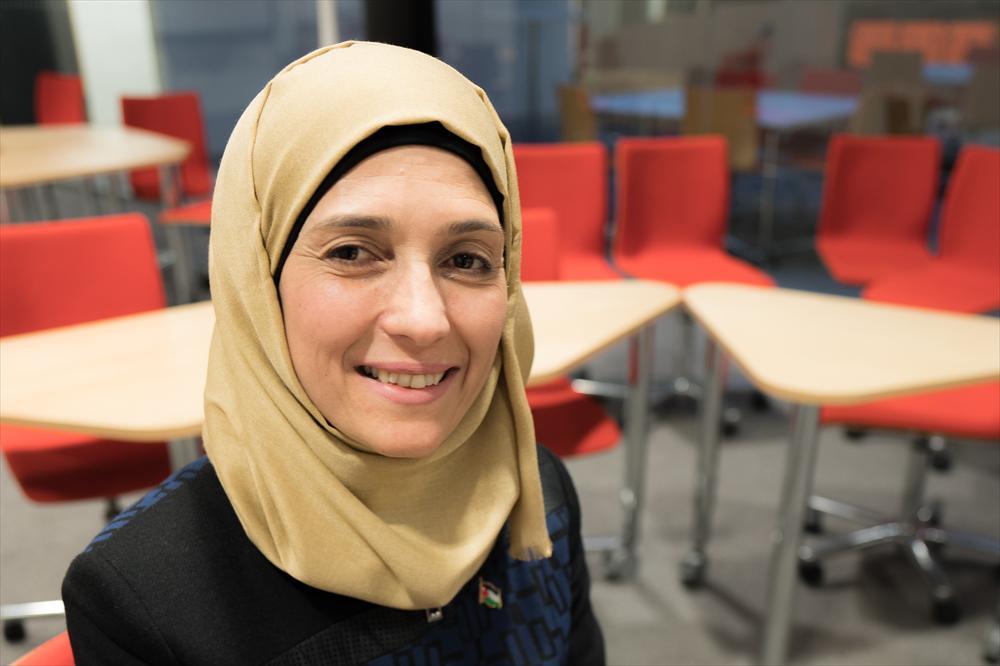 Last year Hanan al-Hroub from Palestine was awarded for being the best teacher in the world. By using games and methods based on play she teaches children to work together and respect each other.

Hanan al-Hroub flicks through the photos on her phone, and selects a picture of a boy drawing a circle on a piece of paper. The boy looks relaxed and focused on his task. “Can you see how he’s smiling?” she asks.

Hanan al-Hroub, 44, teaches seven-year-old schoolchildren at Samiha Khalil School in al-Bireh, near Ramallah. She has used recycled materials to create a colourful learning environment in her classroom, where children can at least for a while simply enjoy being children – drawing, making handicrafts, dancing with hula hoops, and just laughing together.
“A teacher’s job is to give children a chance to have fun, feel hope, and dream,” says al-Hroub.
In Palestinian territories occupied by Israel, children may witness violence almost daily – or at least pick up their parents’ concerns about the future. For this reason they need to be supported, and shown how to solve problems without resorting to violence.

Al-Hroub’s methods are based on the ways children play naturally. In her teaching she uses games that inspire her pupils to think about moral and ethical questions while they are learning. The goal is to reinforce positive forms of behaviour such as cooperation.

“It’s important for the children to learn to trust and respect each other. But at the same time you have to remember that children are all individuals with their own special needs,” she adds.

Hanan al-Hroub first came up with her play-based teaching methods after two of her own children witnessed a shooting incident in which their father was injured. “The children were traumatised, and had no interest in school. The teachers were just unable to help them,” she explains.

Taking matters into her own hands, Al-Hroub created a play corner at home, where she gradually managed to help her children to enjoy learning again. She next tried the same methods with other children she knew, and in her teaching. She has also written a book about her experiences and ideas.

Al-Hroub’s work so impressed the Varkey Foundation, a well-respected global educational charity, that the foundation chose to award her their Global Teacher Prize for 2016, as the best teacher in the world. The prize amounts to a million US dollars in funding.

Last weekend al-Hroub attended the major education fair Educa in Helsinki, at the invitation of the Ministry for Foreign Affairs. During her stay in Helsinki she also visited Meri-Rastila primary school in the city’s Vuosaari district. “I was impressed by the positive atmosphere in the school and its multiculturalism. The children were learning in several languages in the classrooms, but they all also learn Finnish,” she says.

Al-Hroub feels that many other countries could learn from the methods Finland has used to integrate immigrant children: “If you respect the children’s native languages and religions, they will also learn to respect Finland,” she says.