The Finnish Ministry for Foreign Affairs ranked 29th among the 47 donors in the aid transparency index for 2020, which is published by Publish What You Fund. The transparency points of Finland’s development aid increased slightly, but the rating remained average and the ranking fell as other organisations improved their transparency relatively more.

According to the Aid Transparency Index 2020, the volume and quality of open data on international development cooperation has increased significantly over the past two years.

The index measures how well donors comply with the requirements of the International Aid Transparency Initiative (IATI) concerning, for example, publication of plans, budgets and project-specific data provided in an agreed, comparable format.

The greatest challenges for all organisations are related to the publication of performance data. Only some organisations publish project-specific results and fewer still publish project reviews or evaluations. Without this information, monitoring the effectiveness of projects is not possible.

Finland second among the Nordic countries

Finland ranked in the middle of the biggest group of donors covered by the index, that is, in the fair category. While the timeliness, quality and coverage of the data published by the Ministry for Foreign Affairs has improved somewhat, there are still shortcomings in the published data.

However, significant efforts have been made in recent times to rectify some key problems, such as the publication of performance data. As a result, the quality of open data concerning performance will improve in the near future. Basic data (project descriptions, funding information) can be accessed by everyone on the Foreign Ministry’s website soon after projects’ funding decision. Budget information is also published comprehensively.

As in previous years, multilateral organisations performed better than state agencies and ministries in the assessment. The Asian Development Bank again ranked the highest with nearly full marks, scoring close to 100. The UN Development Programme (UNDP), the African Development Bank (AfDB) and the World Bank (WB) also ranked among the best performers.

Sweden’s ranking of 23 was the highest among the Nordic countries. Finland was followed by Denmark and Norway, which were ranked 39th and 40th.

Increasing transparency as a goal

The organisation behind the index recommends that countries in the ‘fair’ category, such as Finland, make transparency a priority.

According to the organisation, development aid donors should also invest in the publication of project results and impacts and raise awareness in partner countries about the data currently available. These measures would build trust and improve the quality of data.

The previous Aid Transparency Index was published in 2018. 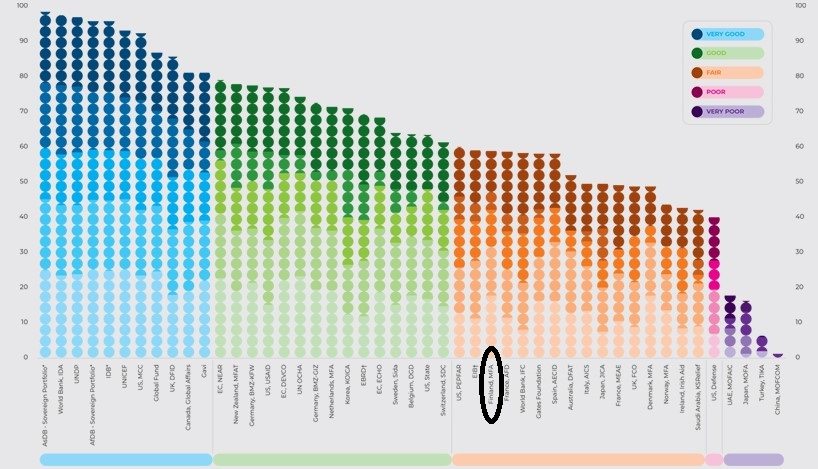