Climate change has wide-ranging impacts. That is why actions to combat it must be incorporated into all aspects of societal policy, including foreign policy, security policy, trade policy and development policy. The consequences of climate change burden poor developing countries the most seriously. Finland supports the climate measures of developing countries as part of development cooperation.

The Paris Agreement, adopted in 2015, is one of the most important milestones of the work against climate change. The other two key agreements are the 1992 United Nations Framework Convention on Climate Change (UNFCCC) and its supplement, the Kyoto Protocol.

The Paris Agreement is a comprehensive legally binding instrument. For the first time nearly all the countries of the world have indicated their willingness to take action to tackle climate change.

The goal of the Paris Agreement is to keep the increase in global average temperature to well below 2 °C and to aim to limit the temperature increase to 1.5 °C. The agreement also sets a long-term target to focus on climate change adaptation. Finance flows will be made consistent with a route to low-carbon climate-resilient development.

The aim is to get global emissions to peak as soon as possible and undertake rapid reductions thereafter. Another goal is to achieve a balance between man-made emissions and removals by carbon sinks in the second half of this century.

The broad security perspective of the EU’s and Finland’s security policy focuses on comprehensiveness and preventive measures. Finland supports the climate measures of developing countries as part of development cooperation.

Adaptation measures may vary greatly depending on location. The means to tackle climate change are different in coastal areas susceptible to storms than in grazing land affected by draught, for example.

Climate change has adverse impacts on the food security of households, which in developing countries is largely the responsibility of women.

Women have diverse everyday experience of how best to adapt to climate change and how it can be curbed most effectively. However, women’s possibilities to influence decision-making are often weak. 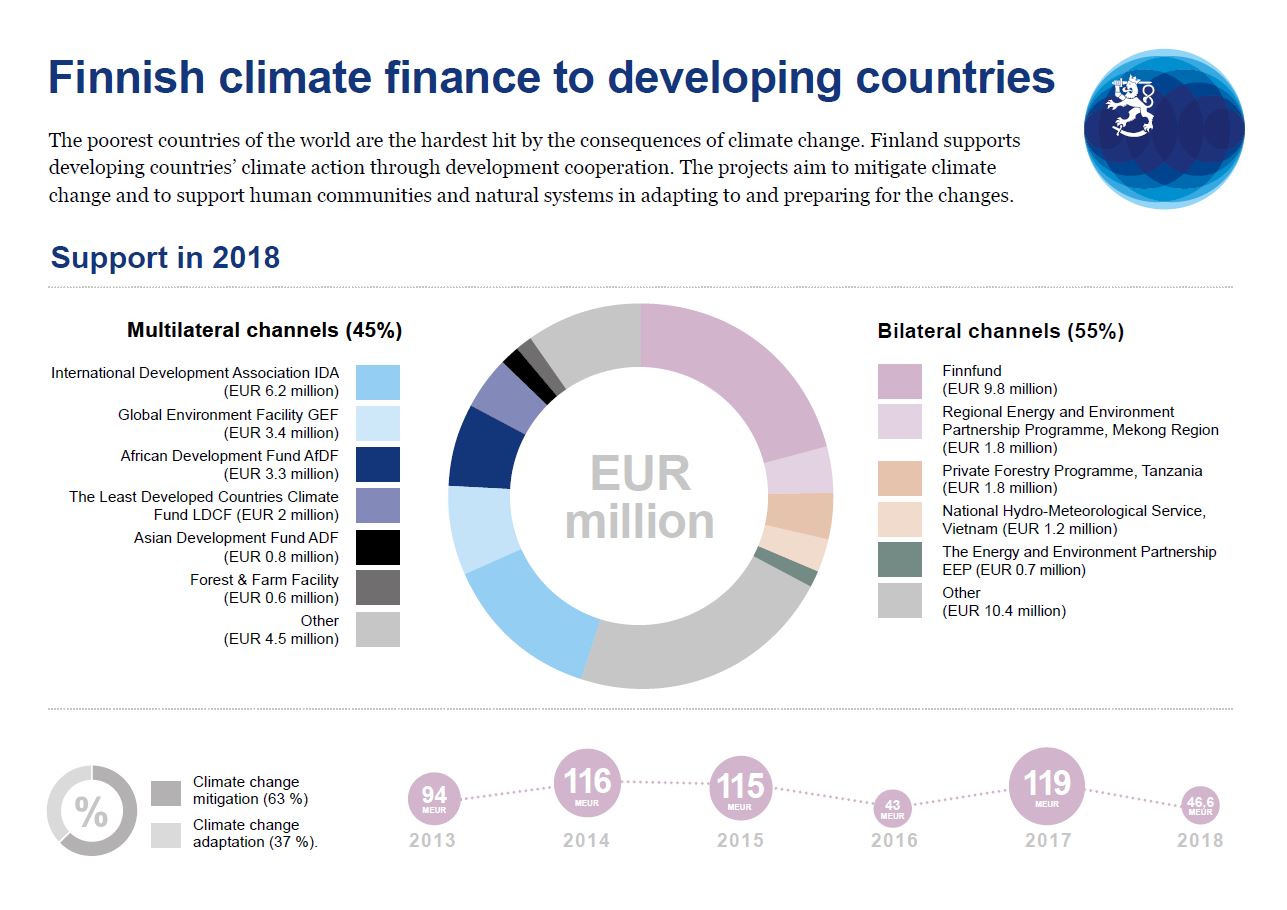 Developing countries need support in their national climate actions. They need support, for example to develop legislation and climate officials’ know-how and strengthen climate institutions. They also need to build citizens’ resilience and decrease their vulnerability to the adverse effects of climate change in both rural and urban environments.

Industrialised countries support the poorest countries by various means. They provide funding and expert assistance so that developing countries can develop their own potential to respond to climate change. Technology development and transfer also play important roles. In all this development cooperation has an important part to play.

Finland uses a variety of channels to provide this support, including funds established under the UNFCCC, the Global Environment Facility (GEF), the Green Climate Fund (GCF), bilateral development cooperation projects and NGO projects. In 2017, development policy investments were channeled into the Finland–IFC Climate Change Program, a joint climate fund that Finland set up together with the IFC (International Finance Corporation), a member of the World Bank Group. The climate perspective is also taken into account in Finnfund’s financing.

Examples of Finland’s support for the climate measures of developing countries:

Reduction of deforestation is important

Forests bind carbon dioxide. The greenhouse gases from deforestation, or the disappearance of forests, account for almost one-fifth of global greenhouse gas emissions.

Reducing deforestation and forest degradation also yields many other benefits, such as the protection of water reserves and biodiversity and the prevention of soil erosion.

Finland supports the pricing of emissions in developing countries among others in the World Bank’s Partnership for Market Readiness Fund. Through the fund, 19 countries receive support for the development of emissions trading schemes, carbon taxes and other emissions pricing schemes.

Alongside development cooperation, the Ministry for Foreign Affairs procures emission reductions from investments made through the Clean Development Mechanism (CDM). It is a system under the Kyoto Protocol where industrialised countries finance emission reduction projects in developing countries.

Target countries benefit from the projects: they obtain funding and new technologies promoting sustainable development. Industrialised countries get access to emission reduction credits from projects; they can use these credits to supplement their own emission reduction obligations.

Finland’s CDM project portfolio has a total of about 150 projects in developing countries. The Ministry of Economic Affairs and Employment coordinates the purchase programme under the Kyoto mechanism.

During the ongoing second commitment period of the Kyoto Protocol (2013–2020), emission reductions are acquired through the following carbon funds: the Asian Development Bank’s Future Carbon Fund, the NEFCO Carbon Fund and the World Bank’s Prototype Carbon Fund. In these funds, the focus has shifted to the repatriation of emission reductions.

During the second commitment period of the Kyoto Protocol, Finland also has two bilateral clean development mechanism projects, the Ningxia Federal Solar Cooker Project in China and the Reduction of Methane Emissions from Ruseifeh Landfill project in Jordan.